The Myth of Utis and Rhododendron

Once Rhododendron wanted to marry so he went to ask the hand of Utis Tree in Autum Season. The tree of Rhododendron was very ugly. All the tree was covered by the bumps of knots of branches.
And Utis was in its full beauty as it was a season of her beautiness. She was tall, slim with shiny leaves.

'No one would like to marry with you' Utis said after looking Rhododendron.

Hearing this, Rhododendron was so angry and challenged ' Come in spring season to see me'.

Time passed away. Finally it was a time of Spring season. Utis remembered the challenged of Rhododendron and decided to see it once. 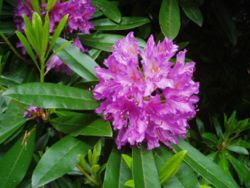 As it saw Rhododendron, covered with flowers it slipped through hill. So it is said that Utis tree grow only in the place where landslide occurs.

Photo Source: Wikipedia
Posted by Arati at 11:53 AM