'I found a note book'

I got chance to learn many things in documentation centre beside my work. Books became my teachers and a window to peep the world.

I visited Singapore, Canada,remote parts of the village through those books in Documentaion Centre.

One day, as usual days I was organising the books, I found a note book. I became curious towards this document because it was hand written.Otherwise all the books are printed.

The other factor that attracted me to look this particular note book was the beautiful handwriting of the writer and the language.

When,I scrolled down my eyes to this note book I found its language very interesting.The language is very direct. We can feel Nepali sound while reading it.The grammars are not correct( Although I am weak in English I could feel it).

Later I came to know the name of writer. Her name is Archana Thapa. She was a married women which I came to know after reading her notes. Where is she? What is she doing? I don't know anything about her.

But the message of the notes are very important to us as they reflect our real society.

[she is daughter of Dhan Bahadur Kumal]

She is studying in class 8.Before she got typhyoid thats why she was delayed in her study. In her class there are 79 students. Out of them 12 are Kumal. Her sister is studying in class 7 and in her class there are 35 Kumal. When I asked her about reason of decresing number of Kumal Students in higher class. She told one of the main reason is due to early marriage. Boys and girls at 7/8 class get marriage ownself(elope)then leave school. She said such kind of social disconstruction was in practice in her society since long ago.She told but her parents don't want to marry her soon. They always encourage her to study & they had told her they would expense in her study even by selling land,She told although her mother is illiterate if they didn't study she scold them.

on my question about behavior of teacher with Kumal Students, she told their teacher never encourage them.Bahun Chhetri students are good in studies than Kumal because they don't have to do household work like them.Also they take extra tution,coaching.But Kumal can not afford extra money on tution, coaching. Bahun Chhetri students understand lesson easily but kumal students are dull $ can't understand their lesson.But they don't tell their teacher about this due to fear and shame because otherwise teacher scold them . Their teacher usually scolded them saying"when can we improve by teaching rotten like you".and also says"what will you do by study,you can't do anything". She said .so she doesn't like them she said.

One time her Bahun chhetri friends told why they kumal comes school.They don't study. They (kumal) come only to disturb them.Then she discussed with her kumal friends and they together quarreled with them saying why they (Bahun,Chhetri)come in Kumal area, go in their own area. After this they hesitate to speak ill of Kumals.

She said nowadays Kumal are improving in education.4 Kumal are studying certificate level outside from Naukilo.
Posted by Arati at 3:23 PM 1 comment:

I got a new orchid plant, in my list of orchid collection this month. I must thank to Am dai who brought me orchid although it is hybrid, from Illam, a place famous for orchids.

Now I have seven different kinds of orchid in my home.
The first orchid is from the Dakshin Kali which I bought it in Rs 30. It grows in a pot. When it bloomed for the first time, I didn't like it becoz of very small size. Its size was similar to paddy's flower.But it bloomed very nice this year. The flower's were so attractive ,white flowers.

Second one is from a temple near home. It was an one year ago when I visited that temple, a huge tree was lying in the way to the temple. and it was covered with orchid plants. I took it out from there and brought a lot at home. It hasn't bloomed yet but I have seen its flowers. It's colour is dark purple.

Third and Fourth, It was also brought by a friend of mine from Sankhuwasava last year. I like to thank him as well. One one of the orchid bloomed in the same year. It's colour is light purple and it is growing tender leaves these days.Other plant is in the stage of 50 -50. I don't know wheather it survives or not.

Fifth and Sixth, I bought it from new road. The plants were so shiny when I bought it but it is also in the stage of 50- 50.

Seventh is from Am dai. I don't know about its flower.There are four buds in it. I think It blooms next week.

My Dream about Orchid

I wish I had a digital camera with high power of Zoom lens so that I could capture all the flowers and show all of u.
Posted by Arati at 2:47 PM 1 comment:

I am posting this article through new laptop. Actually it is old but new to me. This laptop is donated by two Canadian Volunteers before they left Nepal. May be it is outdated laptop in Canada.
But it is new for our office and me becoz the old laptop was very old. I think it is of 60s!!! The screen was so conjusted and fonts were...... Leave it.Past is past.
I always have to work in Documentation centre so they provided me this laptop. There is no desktop computer in Documentation Centre. Although I am only for few days in this office,this will be my laptop until I work here.
Time to work!! otherwise the scolding of supervisor.

The search about this laptop in google 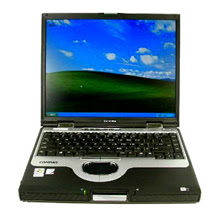 The search of old laptop in google 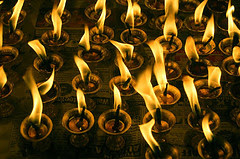 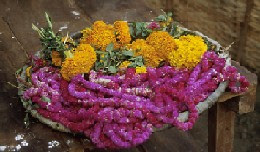 Today, early in the morning my mom came to our room and started weeping. She said,'My father is ill and he is paralysed'.

My whole body freezed by hearing this and I became blank for a moment.

We came to know that our grand father is hospitalized in Dharan and my uncles are taking him India for treatment.

I immediately remembered the post of my article about him few days back and questioned to myself what was that??
Posted by Arati at 12:59 PM No comments:

My mom is fond of telling her childhood days to me becoz we spent so much time in Kitchen as compared to my brothers and sister.

I remember every incident that she start to tell from its first line of starting. But I have to listen her as enthusiastically as I am hearing for the first time. She scolds if I didn't listen to her. If not, she says now you are big enough not to listen to me. No body cares to me as I cared all of u so much.

She tells about her father, mother, sister, brother,Kaka, kaki, phupu, boju and the villagers which she remembers.

My grandfather had a large joint family. He had 5 brothers and 3 sisters. He took all the responsibilities to grow them up. He was the second son but he fulfilled as a role of first son.
My grandfather's eldest brother was an Indian army so he stayed out of home all the time. My mom said that he didn't like the job of 'Majhya' to collect all the revenue of that area and give to government. so he asked my grandfather to do all those jobs.

My great grandfather left my grandfather in so much debt. But by his effort, he paid all those debt and kept his family a happy family.

I know only the surface part of his life. But he is more than what I know about him. He is a real social worker. He has contributed a lot for his village'Madi in sankhuwasava'.
Some of the contributions are:

Now he has only one vision that is to join the road to that village.

He is now in his early 80s but he is as active as he used to be. He is a man of simplicity. He never thought himself as a Majhya but as a man who is always ready to serve other.

I believe, he got all this success because of the contributions my grandmother made as well.