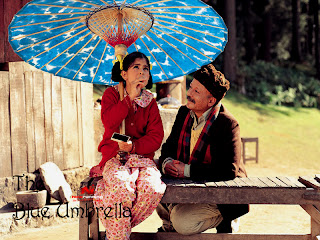 A small girl (Biniya) gets blue Japanese umbrella.An Old shopkeepers, in that village, desires it at any cost. He tries to lure the girl by offering lollipop and balloons for that umbrella. The girl is not attracted by the offer. He goes to umbrella shop and finds that he can’t afford it. The desire to own that umbrella leads the old man to steal it. He colours its red so that others would think he had bought it and proudly displays it to his villagers.


The girl can’t find umbrella and becomes very unhappy. She looks everywhere for it and finds that old man had stolen it.

When the villagers finds the real story, they banish him for his misconduct But he doesn’t leave that village. So everyone ignores him in gatherings and ceremonies.


The small girl notices it and feels sorry for him.

One day she goes to his shop to buy some biscuit. The old man finds that the girl has left her umbrella. He eyes it with regret because of the grief it had brought. He takes it inside, and tries to burn it. But he couldn’t . So he looks for the girl and returns it. But the girl doesn’t take it back.

This is the outline of the story.

The director has succeeded in portraying the emotions of happiness when the girl gets blue umbrella, sadness when losing it. He is successful in showing the feeling of old man’s happiness after getting umbrella and the feeling of ignorance after the disclose of this theft.

It is based on a Ruskin Bond novella by the same name, ‘The Blue Umbrella’

"But it’s such a pretty umbrella!" protested Ram Bharosa. "It’s the best umbrella in the village."
"I know," said Biniya. "But an umbrella isn’t everything."

Note: I want to thank Suryama for editing this article.
Posted by Arati at 2:01 PM