The bleeding heart, grown primarily for its ornamental heart-shaped flowers, prefers semishade and fertile, well-drained soils. Various species bloom in yellow, white, or various shades of red and the hardy plant can thrive for years if undisturbed but protected.
(Oxford Scientific Films/Deni Bown )
My comment: I always used to wonder how the bleeding heart looks after reading an article in kantipur by sukumaya, sister of parijat. In that article, she described it remembering her sis parijat on the anniversary of her death. Parijat was also a great lover of flowers. 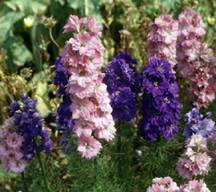 Garden Larkspur
The garden larkspur, native to northern temperate regions, is a fast-growing, branching, annual flowering plant, grown for its colorful white, pink, or blue flowers. Reaching a height of 1.2 m (4 ft), larkspur grows best in a sunny location in fertile, well-drained soils. Plants of this genus may be especially susceptible to damage from slugs and snails.
Oxford Scientific Films/G.A. Maclean

My comment: we call it 'dhania phul' becoz the leaves of it is very similar to corriander. 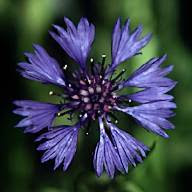 My comment:oh!!! this is the most common flower I see these days in swoyambhu area. It's a nice cut flower. It can remain upto 10 days as a cut flower in water in flower vase. 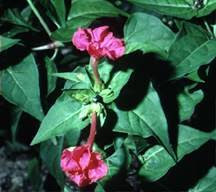 Nail Polish Flowers
The nail polish plant, so-named because of the bright color of its flowers, belongs to the four-o’clock family. It grows best in sunny locations in fertile, well-drained soils.
Oxford Scientific Films/Waina Cheng

My comment: I didn't know it's name till today. But the name was funny one Isn't it. Nail polish flower!! 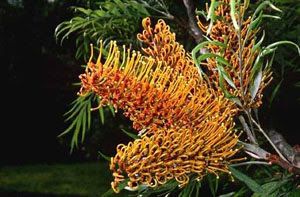 Silk Oak
A native of eastern Australia, the silk oak has been introduced to tropical and subtropical areas worldwide. The dark green or bronze leaves are covered with white, silky hairs on the underside. The yellow-orange flowers attract bees and provide nectar for honey production in some regions. The silk oak is also used as a shade tree, a street tree, and even a potted ornamental.
Bruce Coleman, Inc./Bob Gossington
My comment: it is found along the ring road of ktm. It's sticky becoz once I picked it it made my hand sticky !! 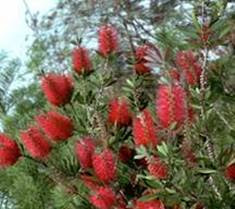 Slocum Crimson Bottlebrush
The crimson bottlebrush, a member of the Callistemon genus, is cultivated as an ornamental shrub worldwide and can grow as tall as 8 m (26 ft). The distinctive crimson flowers, which resemble br
ushes used to clean bottles and test tubes, can be up to 10 cm (4 in) wide
Animals Animals/Perry D.
My comment:I came to know it's name through my father. I thought it's name is very suitable to it when I first heard it.