A girl with a blue earring 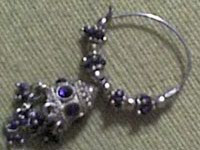 Note: This is my first article that I published in my brother's blog. I hadn't blog of my own at that time so now I am publishing it in my own blog. I hope u like it.

As always, that day I was in hurry to my college. I was walking on the way; my eyes got stopped in a earring which was lying in the middle of the road. Quickly I picked it up. I thought whether anybody was watching me or not only after picking it up. I relaxed nobody was watching because it was an early morning. I moved forward. I dropped it in my right hand pocket of my jacket. I was walking and my hand was inside my pocket which was holding that earring.

I was thinking who might have dropped it may be the girl of my same age because I see many girls of my age wearing such type of earring. I remembered a movie which I watched recently by that earring. The movie's title was' A girl with a pearl earring' and the actress was Scarlett Johansson. Only one earring was used in that movie.

I reached my college. I was holding it inside my pocket. Although I was very curious to see I didn't see it. The class was running and my hand was still holding that earring. As soon as the class was over I showed to my friends but they reacted passively may be they didn't hear me. I kept it in the same pocket. All the classes were over so I returned back home.

I showed to my mother. She said it is very beautiful and will be more beautiful if it is made out of gold. I showed to my sister and she too said it was beautiful and remembered her own earring which she took out from her jewellery box and put it herself and in the mean time I was writing the story of ' A girl with a blue earring' wearing that blue earring.
Posted by Arati at 10:07 AM